The city of Linz

Linz (/ˈlɪnts/; German pronunciation: [ˈlɪnt͡s]; Czech: Linec) is the third-largest city of Austria and capital of the state of Upper Austria (German: Oberösterreich). It is located in the north centre of Austria, approximately 30 kilometres (19 miles) south of the Czech border, on both sides of the River Danube. The population of the city is 200,839, and that of the Greater Linz conurbation is about 271,000.

In 2009 Linz, together with the Lithuanian capital Vilnius, was chosen as the European Capital of Culture. Since 1 December 2014 Linz is a member of the UNESCO Creative Cities (UCCN) network as a City of Media Arts. Cities receive this title for enriching the urban lifestyle through the sponsorship and successful integration of media art and involving society in these electronic art forms.[2] Linz is well known for the Linzer torte, which is said to be the oldest cake in the world, with its first recipe dating from 1653

Statue of Johannes Kepler in Linz, located on a pathway between Saint Martin's Church and the Linz Schloss/castle 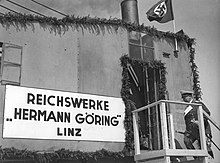 Hermann-Göring-WerkeThe city was founded by the Romans, who called it Lentia.[5] The name Linz was first recorded in AD 799.

It was a provincial and local government city of the Holy Roman Empire, and an important trading point connecting several routes, on either side of the River Danube from the east to the west and Bohemia and Poland from north to the Balkans and Italy to the south. Being the city where the Habsburg Emperor Friedrich III spent his last years, it was, for a short period of time, the most important city in the empire.[6] It lost its status to Vienna and Prague after the death of the Emperor in 1493.

One important inhabitant of the city was Johannes Kepler, who spent several years of his life in the city teaching mathematics. He discovered, on 15 May 1618, the distance-cubed-over-time-squared — or 'third' — law of planetary motion. The local public university, Johannes Kepler University, is named after him.

Another famous citizen was Anton Bruckner, who spent the years between 1855 and 1868 working as a local composer and organist in the Old Cathedral, Linz. The Brucknerhaus is named after him.

Adolf Hitler was born in the border town of Braunau am Inn but moved to Linz in his childhood. Hitler spent most of his youth in the Linz area, from 1898 until 1907, when he left for Vienna. The family lived first in the village of Leonding on the outskirts of town, and then on the Humboldtstrasse in Linz. After elementary education in Leonding, Hitler was enrolled in the Realschule (school) in Linz, as was the philosopher Ludwig Wittgenstein. Notorious Holocaust architect Adolf Eichmann also spent his youth in Linz. To the end of his life, Hitler considered Linz to be his "home town",[7] and envisioned extensive architectural schemes for it, wanting it to become the main cultural centre of the Third Reich.[8] In order to make the city economically vibrant, Hitler initiated a major industrialisation of Linz shortly before, and during, the Second World War.

In addition to an ordnance depot, Linz has a benzol (oil) plant which was bombed during the Oil Campaign[9] on 16 October 1944. What was once the Mauthausen-Gusen concentration camp is 20 km (12 miles) east of the city of Linz.

In 1996, the Council of the city decided to account for its Nazi past. The widespread scientific workup, which was implemented by the municipal archives, covered the period prior 1938 and the denazification after 1945. Linz became the first city in Austria to deal intensively with its own Nazi past. In May 2001, seven scientific publications, online presentations, and numerous lectures were made public as a result of these efforts. The culture of remembrance extended to the construction of monuments for the victims of National Socialism. Especially since 1988, numerous memorials have been created in public spaces. The confrontation with the Nazi past resulted in the renaming of many streets. In 1945, immediately after the end of the Nazi dictatorship, 39 streets in Linz were renamed, whereas from 1946 to 1987, only two streets were renamed. However, since 1988, 17 new traffic areas were named after victims of National Socialism or resistance fighters. In the recent past a number of Nazi victims and activists who fought Nazism were honored by the city. Simon Wiesenthal, who founded the first Jewish Documentation Center in Linz in 1945, received an award for his work in remembrance of victims of the Second World War.

The coat of arms of Linz developed from the seal image, which was used as emblem since 1242. It showed the open city gate flanked by two crenelated towers on rocky ground. From 1288 on, the gate was shown standing on water. The coat of arms shows a red plate on which stands a castle with twin towers. Those towers are crowned with three crenelations. The towers include an open door; above the door the red-white-red shield of Austria is attached. The gate and towers symbolise the medieval fortified city. The wavy bars indicate the position of the city near the Danube. The Austrian shield is a reference to the former territorial city.

The urban area includes (parts of) 13 other municipalities with together 271,000 inhabitants. Linz is also part of the Linz-Wels-Steyr metropolitan area of Upper Austria, home to around one third of the state's population (460,000 people) and second-largest urban area in Austria.[10][11] Linz has a total number of about 157,000 jobs. However, only half of vacant jobs can be covered by its inhabitants. This enormous job surplus causes a correspondingly high rate of commuters from the surrounding communities of Linz, resulting in enormous traffic problems.